Ever watched a movie, which has countless cute elements in it? Filled with all your favourite things and also innocent romantic elements that wrap you in a blanket of comfort? Leap year is such a movie for me!

The main character is called Anna (played by Amy Adams), she thought her boyfriend was going to propose to her during a romantic dinner but he didn’t. Instead he told her, that he is going to Ireland for business. Anna’s dad (played by John Lithgow) told her that she should propose to her boyfriend on Leap year, the 29th of February, since that’s a tradition for women to propose to men in Ireland.
A lot of things go wrong in this movie. It starts off with her not being able to fly directly by plane to Dublin, because of a storm. She therefore ends up in a small town, where she hires a guide called Declan (played by Matthew Goode) to bring her to Dublin. On the first night, she spends the night at his inn.

The scene of the inn that I found most hilarious goes like this:
Anna plugs her phone charger into the socket and short-circuits the entire town.
Declan is downstairs at the bar and says a bit annoyed: “Women, for the love of God.”
Anna uses her flashlight to check out a picture in a picture frame. The door opens and she shines her flashlight into Declan’s face.
Declan says annoyed: ”What the hell are you doing?!”
Anna: “Plugging something in.”
Declan pulls the picture frame from Anna’s hand: “Give me that, that’s personal,” and gives her a plate with sandwiches.
Anna: “Ehmm… You fried my Blackberry”
Declan says angry: “You fried the whole village, idiot!”
Then he leaves the room and slams the door behind him.

It is not just the short-circuiting of the town, that made me laugh but also the way she did it. She had to rearrange the whole room to reach the socket, than of course Declan. Declan has an Irish accent, which makes the lines that he say in the movie extra adorable. He, himself, is already cute; his behaviour, the way he walks, the beard. He also calls her suitcase “Louie”. Anna told him that it is a Louise Vuitton, which does not mean anything to him. Anna is cute too, she looks innocent which she is most of the time but she is very clumsy. Hence things going wrong in this movie. 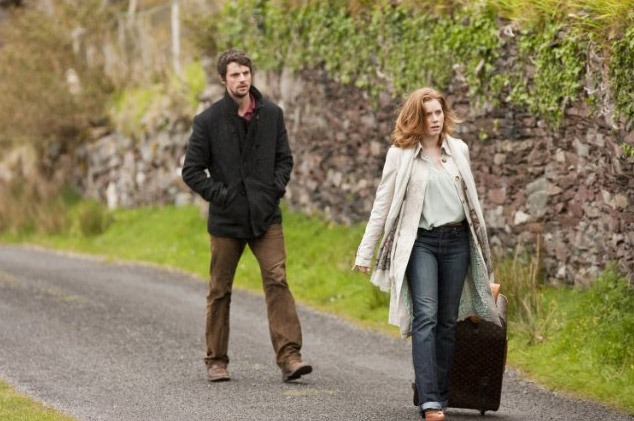 I love this movie, because of these kinds of cute elements, the beautiful landscapes, innocent romantic scenes. The conversations between Declan and Anna are sweet and adorable. The environment is Ireland… I love the UK…

A few lines of the movie to comment on:
“If your house was on fire, what will you take in 60 seconds?”
This question refers to things you need and not to what you have… My answer to this question is I would drag my future boyfriend or hubby out of the house *giggle*

I wonder if men like Declan exist, know what they want, willing to get it, but who will leave like a gentleman when he knows he has no chance. Without even asking the question, that would make the scale tilt in his favour…
Such a man can miss out on things, especially when the girl won’t go after him… I hope the guy, who I like, will just say it… No matter what I say or do… It doesn’t have to be romantic, it can even be out of the blue: “I love you!” So that I can reply with a smile: “I love you too.”
However, if the question is “Will you marry me?” I am expecting him to kneel when he asks me… If not, it will be a “No”… He should know why I keep telling him “No”… That is if he truly loves me *smile*
Read More

Sharing information about yourself on the internet is daring, but it can also be hazardous. You are sharing a part of yourself through the internet. A world, which is filled with a few of your friends and many strangers who might be interested in you or not at all.

Just like the real world, there are criminals amongst them some obvious - When you enter certain chatrooms and respond with I'm female, the chance that you receive perverted responses is a high possibility - or hidden like a fake website/phishing site that looks like the original site.

Fortunately, there are a lot of fun things to do on the internet. Some share a picture, a video and even soundclips... Lets talk about something more specific "karaoke". There are many people around the world, who publish their work on Youtube. Some medley's are beautiful and sung by talented singers. Others are innovative... If you can't sing make music in a different way like letting an old scanner play the theme song of Star Wars. It is fun to watch people sing no matter if they are horrible, as long as they have fun I'll have fun watching them... However when my ears start bleeding, I'll find the stop or mute button.

A few years back, I karaoked two songs for an April Fool's Day show of DJ LBC and many said it was good. A close friend of mine didn't recognize it was me, which is actually great *smile*. I tend to sing with a pretty high childish voice, when I sing songs in other languages. It is quite embarrassing.

The software I used to record the karaoke was Audacity, but I have lately found out that it crashes for various, sometimes unknown reasons while recording something. So I looked for another software to record things and found WavePad - Curious on what I'm recording? I have decided to pick up karaoke again. I had a test drive with it a few weeks ago... No, no I won't publish anything I have karaoked here. If I do publish things, it might be on Youtube with an image.

Why did I start this blog post again? Oh yes... Yesterday... There was a Shinsen-radio live show from DJ Neko, she played a few karaoke from friends and of her own... It reminded me that old karaoke can be aired on the show again and again... One of them mentioned that he has my karaoke somewhere *sigh*. If the songs are going to be played on air again, I'll be so embarrassed *blush*.

Line of today: Who has my two karaoke songs in his/her possession?
Read More