Four random thoughts about Panda’s: a dream, sleepy me, mythology and singing.

Dream
I had a strange dream yesterday one that makes me laugh and also think “How silly!”. I was drawing panda eyes around some ones eyes with an eyeliner pencil and the person was smiling at me. Not sure what the deal was with that scene, but it definitely didn’t look like “lets paint the gorgeous guy into a Goth!” I mean, come on! These panda eyes are similar to the ones of a real panda *teehee*. Either way it is a cute dream *blush*.

Sleepy me
Talking about Panda eyes, I think I have some… I guess I haven’t slept for at least 7 hours straight for three days. The light blue lines under my eyes aren’t very noticeable with my glasses on, but I think you would notice them if you were staring into my eyes.

Mythology
From one Panda thought to another… All of a sudden my mind wanders to a Chinese mythological story of how the Panda got their black patches. A white bear stepped without knowing it with his paws in ashes, while he cried he rubbed his eyes with his ashes-covered-paws. Panda’s were born starting with a sad event… ~nyaaah

I travelled back home by train today passing a few train stations. Two of them had clothing shops nearby, so I forced myself today to go shopping for clothes, shoes with the goal of finding the ladies shoes and the dress which I have been looking for… For years! The goal was hard to uphold, because I am a girl who doesn’t like shopping! The hurdle of finding clothes/shoes out of many that you like and trying them on to see if they look good on you is a long routine of trail and errors. Perhaps, I’m picky?

But! I have made the first step browsing clothes on my own and found out that many clothes are copies with a slight deficiency compared to the other brand. Have they copied all the catwalks and tried to create their own that is suppose to be affordable for everyone? It is ok, but don’t cheat on the materials… Ok, I might be over thinking this but it isn’t fair to copy a perfectly good design and not at least give us material that is worthy of the "high" price that you tag on your clothes *sweatdrop*.

In the end… I tried some clothes on in the Esprit Outlet and left with a very nice sweater… Gosh, why oh why didn’t the other things fit me and why didn’t I have the courage to try the other ones that aren’t really worth the price *teehee*.

Who loves shopping? Dear readers, I unfortunately still don't enjoy shopping! But I do like the music they play in certain clothing stores *teehee* Perhaps you can radiate some love for shopping towards me?

Lets end this blog post about my failed shopping attempt with something cute! I saw these delicious, lovely Miffy/Nijntje chocolates! Aren’t they cute! 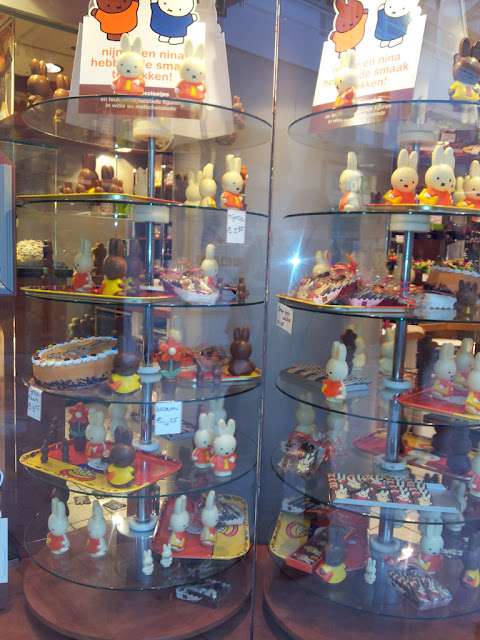 So why this question? It started yesterday and I just started to wonder: “Perhaps this is the modern version of a gentleman?”

I walked through a hall way to reach a flight of stairs to exit a building to go home. A few doors were casually opened by a dark haired stranger. He looked like a man in a hurry, quickly leaving doors open while he walked in front of me. I started to ask him questions out of curiosity based on events that happened before. He replied and I discovered that he doesn’t only look gorgeous, but he has a beautiful voice which creates lovely words and sentences. It was a start of a pleasant conversation. I walked down the stairs before him and opened the door to exit the building.

I was ready to walk to the bus station to find out whether I was still on time to get the bus back to the train station. Ready to say bye bye to him with a smile, but he asked me whether he could drive me to a bus station or train station. I was so captivated in the conversation, that I lost my train of thought and fell into my so called “dense” mode. I didn’t see him as a guy, but more like interesting. He had already opened the car door for me and walked around his car to step into his car. He stepped into his car and it dawned on me… I’m getting into a stranger’s car, a stranger’s car! Wait… but I don’t feel like I’m doing so.

I got in his white car and sat down on a half white, half black car seat. He entered the destination in his navigation system and we continued talking. But it was clear that neither one of us knew the city well enough to know where we were exactly. He shared a few puzzle pieces of his life with cute expressions and even expressions I would expect to receive from friends only. A stranger, who shared his thoughts sweet smile and a few seconds of sadness and doubts. But! We were both very protective of answering certain questions directly which would open our lives as an open book. Making the whole conversation almost like a fairy tale, magical and mysterious.

At the end of the ride, just past my destination he dropped me off on a bicycle road. I unbuckled my… his car’s seatbelt and opened the car door and stepped out. I looked down into his eyes, was about to shake his hand but I paused somehow for a few seconds. He, just like me already extended our hands. I think I frowned a bit and I know for certain I was thinking of asking for his business card, but instead my brain didn’t work as I wanted it to. I asked: “Ehmm… What was your name again?”

He smiled: “Florian.” I reached out my hand, we shook hands and I said my name and said goodbye. I closed the car door behind me and suddenly the worst thing ever happened. My fear just went through my body like an electric current and I felt like walking straight towards to the train station not looking back to see whether he has already driven away. I guess the wonderful conversation with a gentleman just changed into a dream.

I guess I’m still not sure, whether a gentleman exist. The casually opening of doors, the offering to drive me to the train station, the very pleasant conversation. The short parting. Perhaps this is the modern version of being a gent?

Do I want to meet this cute, intelligent, intriguing gent again in the near future? I can’t say definitely, but I can say it won’t be a bad thing to receive more puzzle pieces of his life and open up the book a bit more. So… may another serendipity occur!