I bet you have asked yourself this question at least once in your life? Who will I end up marrying? Or doesn’t this count for people, who do not believe in marriage? Anyway, I have… 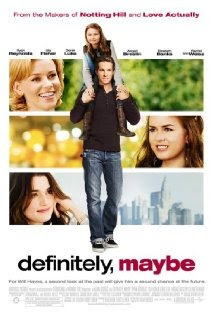 Definitely, maybe - I watched a movie today, which I adore not just because of the lovely actors Ryan Reynolds, Abigail Breslin, Rachel Weisz and Kevin Kline. The title itself “Definitely, Maybe” gives you a hint, who Will Hayes (Ryan Reynolds) will end up eventually. But the journey the so called “detective love mystery” by Maya Hayes (Abigail Breslin), his daughter, makes the story interesting.

Maya asks her dad to tell her why the love/divorce is complicated and also why he doesn’t stop the divorce with her mum. He eventually gives in and tells her how he met her mum and also that two other women were in his life before she was born. He gave the three women a pseudo name and Maya and we, the viewers, start guessing who her mum is. Will told the story in one night and half a day to his daughter. We saw his years flying by, while he told the story starting from 1992.

The fun part of the story is the mystery, but also the way how they show the years. The first huge mobile phone, the beeping/crackling phone-modems to connect with the internet and the heavy very small screen laptops. Next to technology, there were also the clothes. Will started off in his story with his university sweater, a normal suit and eventually he wore an Armani suite to work, but at home he always wears causal which is actually not always normal causal… But enough about that :p

Favourite parts of movie - My favourite quote of the movie is when Will’s daughter heard half of his love mystery and was about to fall asleep. “I can’t believe you smoked and drank, and was such a slut, but I still love you.”

My favourite part of the movie is, when Will finds the edition of Jane Eyre which April (one of the three women) has been looking for, for years. April received a Jane Eyre book for her birthday and April’s dad wrote a message on the title page for her. April lost the book when she moved out after her dad passed a way.

Another similar scene in another movie? - You might recognize a similar scene in the movie Serendipity. The man and woman meet one day and part ways, leaving everything to fate to bringing them back together. He wrote his phone number and name on a 5 dollar bill and she wrote her phone number and name in a first edition book. Eventually the man receives the book… Somehow I love this scene with Will more… Maybe it is because Will was wearing a hoody and hesitates to walk into the bookstore until he sees a Jane Eyre book on display through the window, he walks into the bookstore, the book salesman introduces the book to him and he reads it out loud… Or is it just because the setting Old books in a bookstore ♥

Thanks! – A few friends and I were talking about the movie “Waiting…”, which I was watching on telly during the conversation. A very very strange movie! One of the main actors is Ryan Reynolds, who played a man in his 30-ties who love younger women and works at a restaurant as waiter. Some parts were quite funny in the movie, but most of the time I was thinking: “What?… What just happened?… Noooh…? Whaaaaat?” Certain things were completely random, other things were so gross that you still wonder what really happened.

Ryan Reynolds will appear in a lot of movies these upcoming years, but I liked him as actor already with his roles in “Two guys, a girl and a pizza place” as Berg a waiter/med student, in “Blade: Trinity” as vampire hunter Hannibal King (funny scene with vamp doggy), “Van Wilder” as university student for life Van Wilder (party!), “Harold & Kumar Go to White Castle” as male nurse, “The Proposal” as assistant publisher Andrew Paxton… *rants further*

We ended up talking about the “Green Lantern”, which is not yet in our cinema’s but already showing in the US. I think I’ll go watch it for the humour and some Green Lantern ring action, but Ryan Reynolds is definitely a bonus. I already love his character from the trailer “Green Lantern”. One of my friends, kenji|rei, recommended another movie with Ryan Reynolds, “Definitely, maybe”. I read the movie description on imdb and read who was going to play his daughter… All I ended up saying after seeing a few screenshots was: “So cute! They are so cute!” It was a lovely dad-daughter relationship movie kenji|rei, thanks for recommending it to me!

Curious about my answer to the question… - Who will I end up marrying? I have no idea! I hope he will be lovely in character and personality, someone who I can have a conversation with how silly or weird the chat may be. He does not have to understand everything about me, but more than a little would be nice. Creating wonderful memories with my hubby-to-be… To have children will be one awfully/lovely big adventure! (revised from Peter Pan: “To die will be an awfully big adventure”).

A new chapter in my life should have started by now, but circumstances as usual always stops me from going forward a bit faster. Rolling down the hill has been happening a lot too, these few months. I am glad I had a travel vacation, if I did not have one I would have been trying to climb up the hill non stop without relaxing one bit.

I tend to forget to eat, when I am writing or busy with something else I have to finish. Whenever I forget to eat lunch my stomach will growl at dinnertime. Breakfast, lunch and dinner was a forced routine during my vacation which makes it difficult to forget to eat. At home and when I go to work lunch is the only standard. When I do eat breakfast it is a forced action, because I don’t have an appetite in the mornings. Sometimes I become sick by drinking milk alone, don’t talk about orange juice that will make my tummy turn.

I guess I am healthier during my travel vacation, when it comes to eating… But one routine still makes everything difficult. Being able to sleep, a well rested sweet dream’s sleep. One where you go to bed and wake up at the time, where you are supposed to wake up. Not in the middle of the night or hours before your alarms go off.

*Sigh* All I want to do now is role over a road that is not so bumpy so that I can reach my goal and be a bit closer to the top of my life.

By the way, the travel vacation was great! Both Vienna and Budapest are beautiful cities :3