It has been awhile since I have encountered a strange phenomenon with a man. Not sure whether I should have said something, because apparently looking back and smiling didn't work. Usually people start to talk to me, when I do that.

During my vacation in Iceland people just talked to me, whether I was standing somewhere, walking somewhere or just shot some pictures. I did the same no matter whether the person was a man, woman, older or younger. I guess, it just comes with the vacation exploration instinct. Can you imagine me talking to men in just swimming shorts? Yeah, I know right? I wouldn't have done that here.

I visited an art gallery today, which displayed beautiful photo's from animals up close or close enough to make you watch in awe. They were breathtaking and it shows how gorgeous animals can be. The stories from the pictures are from the photographer David Yarrow. He shares what he saw and felt at the moment he shot the pictures. Their is a movie room, where they also showed videoclips of Yarrow explaining how he shot pictures. The scenes he created, the opportunities and risks he took to make the pictures were fun to hear and watch. Especially the part where he told us how his Nikon cameras usually get damaged by the curiosity of a wild animal or just an accident caused by a wild animal. Seeing a Nikon camera fly, because an elephant kicked it or seeing a box with a camera being carried away by a lioness, priceless! 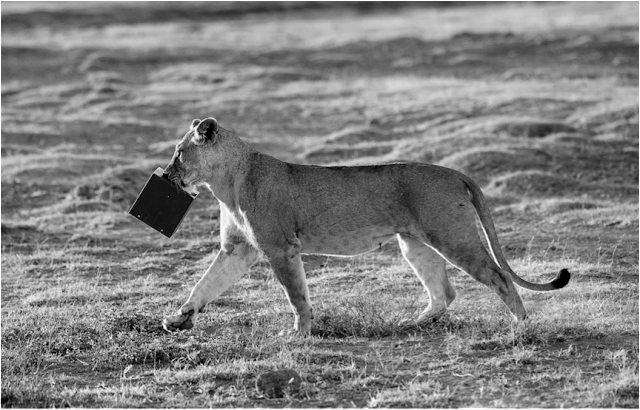 It definitely explains why he called his book "Wild Encounters" and the exhibition "David Yarrow Getting Close". I loved every picture and would have bought the book and let him sign it last weekend when the exhibition opened, but I was on vacation in Iceland so that wasn't possible. Instead I bought three postcards, unfortunately none of the postcards displayed the wolf on the café counter. That scene was awesome even though the scene was set up. Can you see it? David Yarrow wearing a chicken meat necklace while the hungry wolf walks closer and closer towards him? 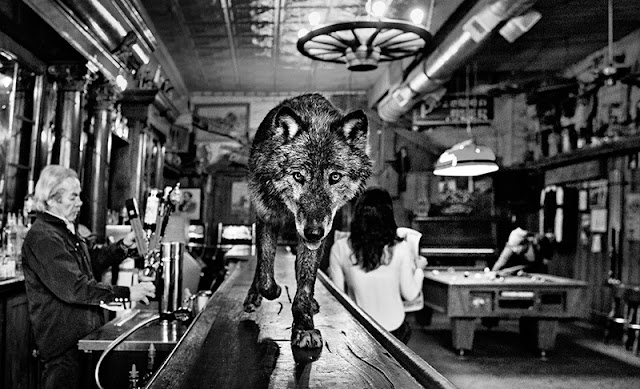 From this exhibition, I found the most beautiful picture the one of the baby gorilla (my preference goes for cute after all *smiles*). Look at the eyes of the gorilla, the leaf in his/her hand: 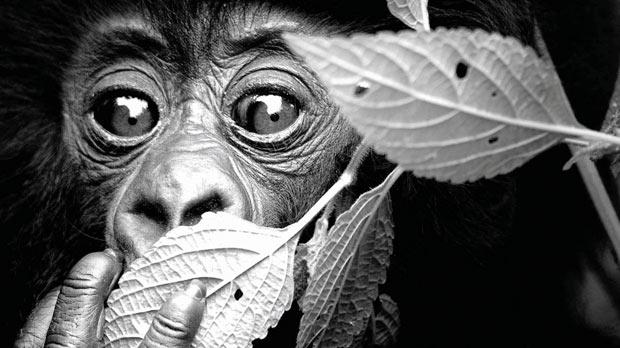 Back to the strange phenomenon with a man
During my visit at the art gallery I saw a man wearing a long jacket, he had a very light I guess a very short beard that almost looks like stubble, wore black framed glasses and had dark brown/black hair, neat light brown heel gentleman's shoes all which would fit with a suit. I have no idea what he was wearing under his jacket, but I can imagine... ~ Ok, that is not completely true because I saw that he was straightening his clothes and tucked in his shirt in his jeans which he was wearing under a brown sweater when I walked to another exhibition room (why am I so observant and why do I remember that?) ~ I guess he looked like a young Clark Kent. I think the young "Clark" was glancing at me a lot, but I wasn't sure because I was reading the stories and looking at the photographs. Even in the movie room I noticed that he glanced. He was talking to a woman when he walked into the building, but he started to distance himself more and more from the woman. Eventually he was alone most of the time, which means he was near me while I looked at photographs. I started to wonder, why would a guy do that? At the second-last room of the exhibition he had the opportunity to talk to me, but he didn't. We were finally alone and he could say something, but instead he quite quickly left the room to go to the last room. The woman, who he talked to earlier wasn't done with looking at the photographs so he walked to the table and looked through the book "Wild Encounters". When I bought the postcards I didn't see him anymore and the woman wasn't around either.

I thought he left, but when I got out of the building I saw "Clark" leaning against a traffic light pole. Opposite of him was a red traffic light and a zebra crossing, so I guess he was waiting to cross to take the tram. He looked at me, I smiled at him, he turned back around to look forward. I looked back down at my phone to see my Google maps results to find my way to the café to meet up with some friends. When I looked back up I saw that "Clark" has crossed the road! The traffic light was still red and he walked over the tram platform, than he glanced at the tram time schedule and walked back. I thought: "Wait! He will see that I am staring!"
So I looked back at my phone. I felt him walking faster and just like Superman he became a wind that just passed me. I looked up and saw him walk around the corner. I carefully walked after him and around the corner I saw him walking away in high speed going with his hand through his hair a few times. All I can think is, what was that energy and intense atmosphere? And what is he doing? So was this guy shy or just weird?
Read More